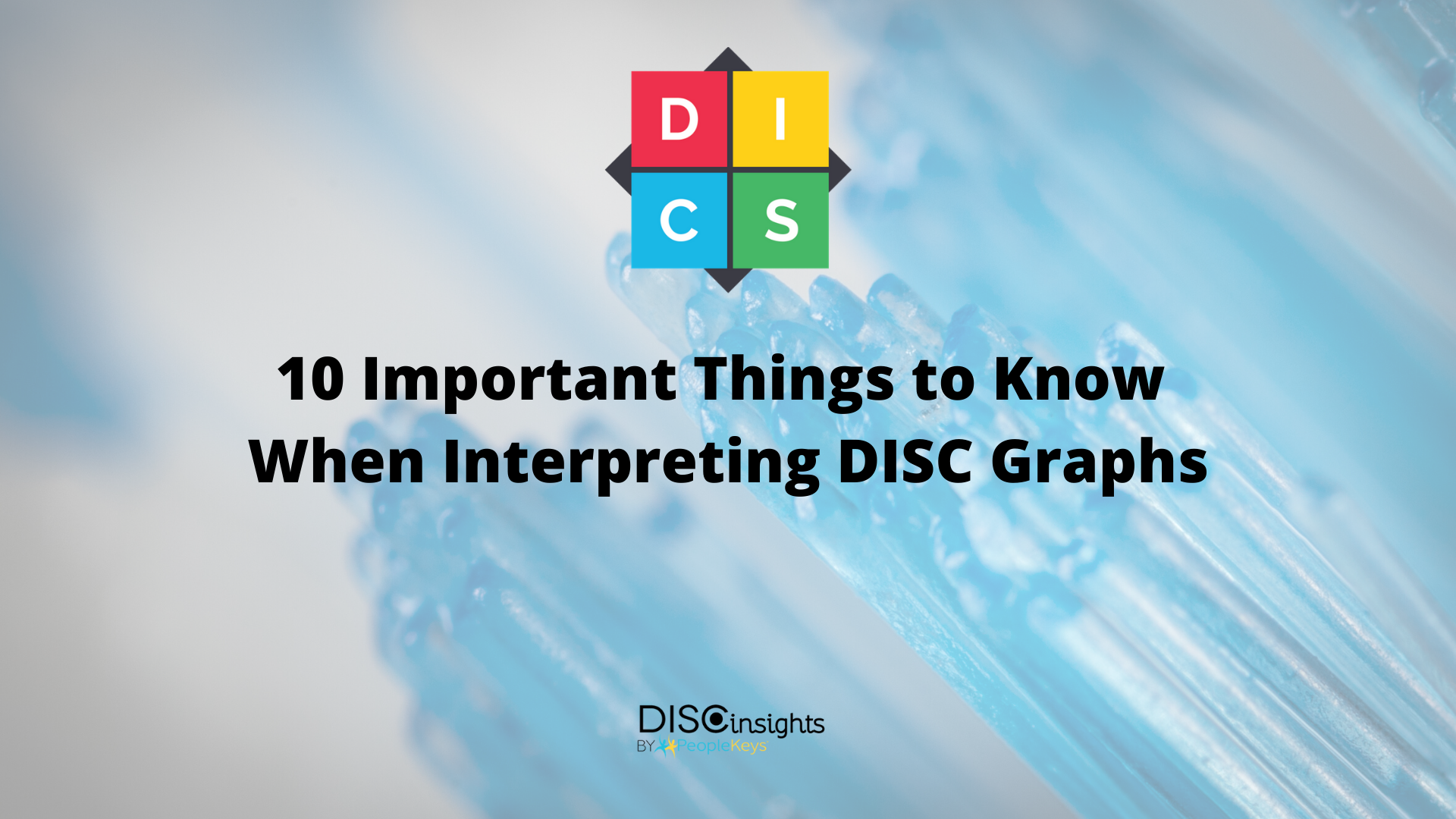 Being able to interpret DISC graphs proficiently is an important skill to develop when using the DISC report in your business or coaching practice. While it’s definitely not rocket science, being presented with these three graphs can seem overwhelming when you’re new to learning DISC theory. The good news is, the more you work with the DISC report the better you will learn the ins and outs of it. Before we break down the ten things you need to know, there are two very important things you must keep in mind when you are reviewing someone’s DISC report: (1) the environment the person took their DISC assessment and (2) each of the four DISC styles are represented in every person in varying intensities.

The first graph in the DISC report shows how someone believes they are expected by others to behave within a particular environment. This graph can be quite different from Graphs 2 and 3, or quite similar. We call this the "Mask" because it might not accurately represent who the person really is. This graph is based on the "most like me" answers in one’s DISC assessment and has the greatest potential for change. For example, if you assess someone and see they have an "I" well above the midline in this first graph, but it’s below the midline in Graphs 2 and 3, this person might believe they are expected to be more outgoing and relational, when they may actually be more task-oriented or passive.

This graph is generated by the "least like me" answers in the DISC assessment, and most represents how a person's core behavior or even how a person behaves under stress. This graph is the least likely to change because it represents ingrained, learned responses to past events in life. This graph is sometimes referred to as the stress graph because of a person’s tendency to revert to their core behaviors under pressure. For example, one’s "S" might spike quite high in this graph when under pressure, revealing their preference to take a step back, slow things down, and evaluate a situation before proceeding or making any rash decisions.

The third graph is an average of the 1st and 2nd graphs and is most depictive of one’s natural behavior. It combines the way someone believes they are expected to behave in their current situation or environment with their core behaviors from learned past responses. This graph represents the self-perception of the person and represents how they communicate and behave in the majority of situations. 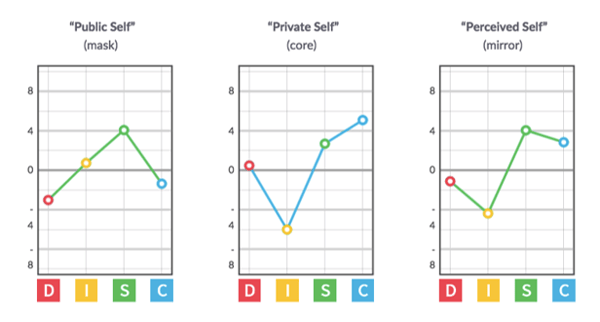 4. Over Shift Pattern – All DISC points above the midline

The "Over Shift" pattern can be a good performance indicator, and if used in the hiring process can alert you to high-achievers and fast-trackers. However, because the D, I, S, and C are all above the midline and showing a high intensity for all DISC styles, it indicates a person is exerting a lot of energy trying to be all things to all people. While this person might be extremely productive, this amount of high energy expenditure could eventually lead to burnout.

5. Under Shift Pattern – All DISC points below the midline

The "Under Shift" pattern is just the opposite of the over-shift, with all four DISC points below the midline. A person with this pattern will show a low exertion of energy overall in the environment he or she is assessed. It can indicate a lack of self-confidence, self-doubt, and in the hiring process, could serve to forewarn someone who may be an under-achiever due to stress or unclear expectations.

6. Transition or Chameleon Pattern – All DISC points on/around the midline

The Transition pattern is when all the DISC points are very tight around the midline. This is not a permanent or natural style for one to stay in, but indicates a person is typically going through some kind of life event, such as a job change. We also call it the Chameleon pattern because the person will blend in with the different DISC styles as they gain comfort in a new situation or environment. It’s recommended to re-assess this person again within a year once they become comfortable in their new environment or the life event has come to an end.

This is a unique style combination of the I, S, and C (in any order) all above the midline. While not as intense as a true "D" style, this style can act as a "D" to take charge when a situation requires. It is important to this style that they have the proper training and a clear understanding of their role and expectations in order to make clear, direct decisions.

8. High intensity of any characteristic (D, I, S, or C) above the midline

Any strength overused can become a weakness. A "D" style may seem overly aggressive, while a "C" can become overly bogged down in unnecessary details. A very high "I" will tend to disregard time-management and goals in lieu of being more social, and a very high "S" will likely slow down and be extremely resistant to change. When reading the graphs, take into context that the other DISC points and their intensities play a part in the overall behavior of the person.

9. Low Intensity of any characteristic (D, I, S, or C) below the midline

People with a very low D, I, S, or C below the midline will exhibit opposite traits of those with high intensities of these styles. A very low "D" will be more passive, avoid confrontation and be slow to take action. A very low "C" will have less attention to detail and not obtain enough information or facts before making a decision. A very low "I" will be more withdrawn, less talkative and social, and might have difficulty building relationships. A very low "S" may become impatient quickly and lack perseverance in situations that require a repetitive process or procedure. It ultimately requires more energy for people who have a low point below the midline to show behaviors common to that trait.

Finally, the best and most important way to understand the DISC graphs is to practice profiling and assessing as many people as you can. Like with anything you pursue, if you want to become great at it, you must practice. Start with people you know first. Because you already know them, the graphs will not only show you what you might already know through their observable behavior, but they might also reveal something interesting you didn’t know…such as one of the special patterns mentioned above. Everything you need to know as a coach is in the DISC report, from the intensities of the DISC traits to how they communicate and tips on how they can communicate with others of different styles. We challenge you, as a new coach, to assess at least ten people you know, whether it’s friends and family or people in a church or social group you belong to. The more you practice reading DISC graphs and understanding different styles, the more confident you will become.

Emily is the marketing manager of PeopleKeys. She's responsible to inform everyone about the latest trends and developments of our DISC products. Personality Style: CSI