Four different DISC leadership styles are sitting around a table staring at a freshly broken egg situated in the tabletop center. They are all visibly frustrated.

Don (D-style) leader says to the group, "We should have seen this coming."

Ina (I-style) leader says, "Well, it was fun while it lasted!"

Sara (S-style) leader says, "I'm just upset that it's over." 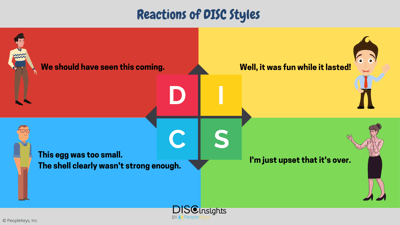 After a few minutes of tense silence, they all begin talking over one another, throwing accusations at one another because they each feel as though something the other should have done could have prevented the cracked egg.

Don feels that Ina was not fully invested in the egg and that Chuck should have spoken up if he thought there was a danger of the egg breaking too soon.

Chuck said he had communicated his concern to Ina in an e-mail exchange, but Ina never responded.

Sara hesitated to interject her thoughts into the now heated conversation because she felt responsible for the negative discourse.

Ina informed Sara of Chuck's concerns last week, but she was afraid to talk to Don because he mentioned during a previous leadership meeting that he "didn't want to hear problems, only solutions." Sara didn't have solutions at the time.

Ina assumed Sara would take the concerns to Don because she is usually the one who organizes all the leadership meetings.

What a mess! Does your brain hurt yet?

So, there they are, the top organizational leaders sitting around a table, staring at the messy result of a preventable communication breakdown, trying to determine who was at fault.

What do you think? When and with whom did the communication breakdown occur?

At this point, Don begins feeling as though he had been taken advantage of as he learns all his team members were aware of critical information he never received. He values trust and commitment and isn't sure his team is on board with his vision and goals.

Ina is now worried that the entire team will be disappointed because it now appears as though she didn't extend the critical information she received from Chuck. She is also concerned that Don will think she isn't a team player.

Sara is freaking out because she is worried that Don will blame her for the cracked-egg and will lose faith and trust in her ability to lead future projects, and Ina will feel like she can't trust her to communicate important information.

Chuck is distraught that everyone else thinks the cracked egg was a random event the team didn't see coming. He spent weeks researching eggshell vulnerabilities and sent his findings to Ina, responsible for review and dissemination. He felt his efforts to help the team were dismissed and undermined.

Situations like this can arise, unannounced in any sized team or organization. Leaders are often charged with determining the root cause of the issue as if there is a singular instance or event that ultimately led the entire group astray. The reality is it was everyone. This communication breakdown was indeed (and unfortunately for the egg) a team effort.

In this egg scenario, each leader has a unique leadership and communication style with its own set of individual associated fears. In the moment of crisis, those fears reared their ugly heads, and no one even noticed. Unfortunately, no one on this team was aware of their personality style, fears, or needs, let alone their teammates'. They are currently operating in the Trust Model Blind Spots and Masks' danger zones, which serve as communication and success barriers.

Below are two recommendations for leadership development and communication improvement amongst organizational leaders and teams:

Build Individual Awareness. The DISC Leadership Report is a great foundational tool for personal growth to help illuminate blind spots and strengths, and encourage continued development in any improvement areas.

Build Team Awareness. Teams who understand how to communicate effectively and support one another are inherently more successful. The Group Dynamics Report is a perfect option for groups to learn how individual behavioral style influences the group, how each DISC style responds to stressors, and strategies for developing better relationships and improved communication skills.

Don't let another cracked-egg scenario derail your team; get equipped and empowered to work through leadership and organizational challenges with the DISC model as your guide. 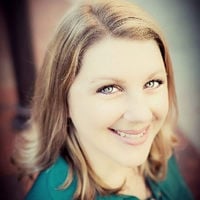