"If it's 'creepy' to use the Internet, military satellites, and robot aircraft to find a house full of gorgeous young models so I can drop in on them unexpected, then fine, I'm 'creepy.'"

Continuing with our look at the DISC personality types of the characters on The Big Bang Theory, let’s take a closer look at the show’s resident comedian and crazy-tight-pants enthusiast Howard Wolowitz.

Even from just looking at his clothes, it’s easy to see that Howard is an I personality. Drawn to bright colors that make him stand out in a crowd, Howard loves to be the center of attention. And why wouldn’t he? He’s confident, optimistic, and funny, and he loves interacting with other people. It’s this confidence and optimism that gives him the ability to fearlessly approach almost anyone in any situation and simply assume that he’ll be able to charm them into liking him. This trait sometimes gets him into trouble with women, as his attempts to be charming can come across as too aggressive and a more than a little creepy. But even though rejection is one of his biggest fears (as is the case with most I personalities), his natural optimism never lets it get him down for very long.

As a member of the group of the central four guys, Howard clearly loves being around all of his friends. Even though he doesn’t live at Sheldon and Leonard’s apartment, he’s always there and always ready with a joke, story, or quip. Howard obviously likes to be seen as the entertainer of the group. Whether it’s with a spot-on impersonation, a wisecrack, or good-natured ribbing, his sense of humor is one of his most endearing characteristics. It’s Howard’s sense of humor and natural optimism that makes him so lovable to the audience, too. Even when he’s behaving in a way that’s obnoxious, he’s still incredibly likable. You can’t help but secretly root for Howard—He’s got the viewers on his side.

His love of socialization and interaction with others extends beyond his core group of friends as well. It’s clear that being able to talk to anyone in any situation is a big priority for Howard. To that end, Howard has learned quite a few different languages: English, French, Mandarin, Russian, Arabic, ASL, Farsi, and even Klingon. This ensures that whoever he comes across, he won’t be left out of the conversation. 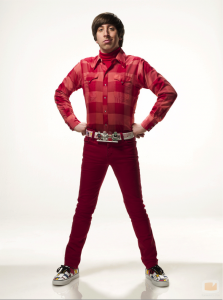 Perhaps not surprisingly, Howard is very drawn to women with D personalities. Both his mother and his wife Bernadette are classic examples of type D behavior patterns: strong-willed, tenacious, and outspoken. In many ways, this pairing makes a lot of sense—I personalities and D personalities are the two most extroverted personality types on the DISC spectrum and pair together very well. (As long as the I is willing to bend to the D’s will, which is definitely the case with Howard!)

On the down side, Howard sometimes comes across as narcissistic or self-absorbed, due to his need to constantly be the center of attention. (His incessant stories about going into space drive his friends totally bonkers, resulting in an intervention by his wife Bernadette.) You could even argue that one of the reasons that he puts up with his mother’s constant demands is that he likes being needed and enjoys that she sees him as the focal point of her world. Howard loves attention and with a fashion sense like he has, that’s a very good thing.

Check out Raj next and see if you have the same personality as him!