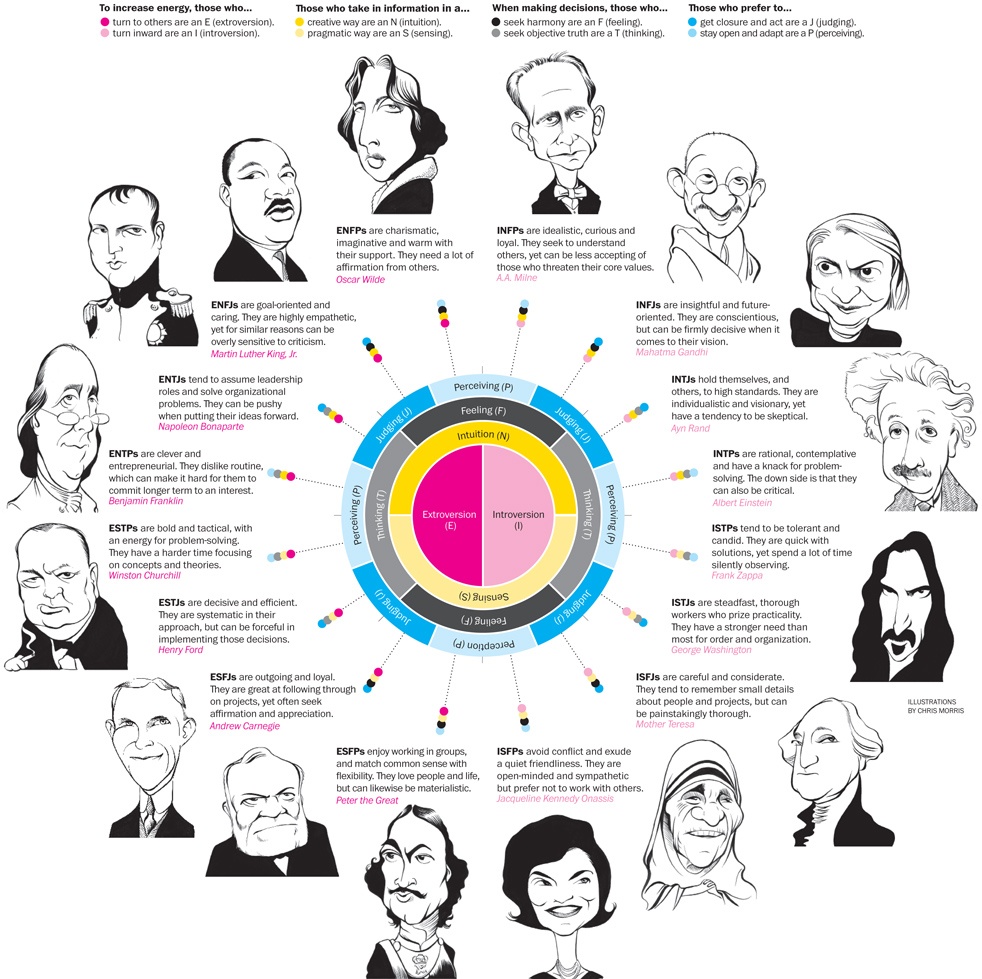 Modern MBTI tests are based on psychological theories published by Carl Jung in 1921. Jung believed that four dominant impulses dictated human behavior: intuition, feeling, thinking, and sensation. The first test was developed by Katharine Cook Briggs and her daughter Isabel Briggs Myers, and was initially used to help women enter the workforce during World War II.  The style of the Myers Briggs type test that is used today was first published in 1962.

In terms of the test-taking process, the Myers-Briggs test asks participants to answer a lengthy series of up to 90 questions. These questions are designed to indicate how the personality of the test taker falls into four binary categories:

Based on an individual’s answers to the indicator questions, each of the four categories will reflect a clear preference on behalf of the test taker. In other words, the test taker will prefer either introversion or extraversion, sensing or intuition, thinking or feeling, judging or perceiving. This results in the test taker being placed in one of sixteen clearly defined personality types, labeled using a four-letter code that corresponds with the test taker’s preference in each of the four binary categories. This means that a test taker’s personality will receive a label indicating personality type such as “ESFP,” “IIFJ,”  “EITP," and so on. The results are designed to help individuals understand themselves more completely. As an example, ISFP is a personality type called “the artist.” Once individuals know that their personality naturally exhibits artistic impulses, it becomes easier to understand the types of careers to pursue. It also helps them avoid common problematic behaviors associated with that personality type and determine strategies for interacting with others more harmoniously.

From looking briefly at MBTI basics, it’s clear that the Myers-Briggs test shares quite a few key similarities with DISC.
While MBTI is based on Carl Jung's work, DISC is based on the theories of William Mouton Marston. Both Jung and Marston specialized in similar fields (Jung was a psychiatrist, Marston was a psychologist), and both wrote extensively about human behavior. Both Jung and Marston were contemporaries and published the key texts informing on DISC and MBTI in the 1920s. Both assessment tools were designed to provide insight into personality and behavior. Both are widely respected and used by individuals, organizations, institutions, and corporations worldwide. There are, however, a few notable differences between them:

Generally speaking, the MBTI is a good assessment tool for individuals looking for self-knowledge. Its results tend to be very personal and typically reveal a great deal about an individual’s core self. Although this may sound like an advantage over DISC, this can, in fact, be a weakness. Because the MBTI is so deeply personal and is based on a large amount of revealing data from the extensive questionnaire, people who take it often feel uncomfortable sharing their results with others. This makes MBTI a difficult tool to use in a public environment such as a business, organization, or corporation.  Since personality testing is often used for team building exercises, corporate retreats, staff training, sales meetings, and other public forums, MBTI can be problematic. When a test taker knows in advance that his or her test results will be shared with others, this may also result in pressure that causes the test taker to fabricate answers in the hopes of making the best possible impression on others. Fabricating answers invalidates the test results, rendering the exercise useless.

When MBTI is used for a public application (employee training, for example), test-takers can often not retain useful information from their personality profile. With 16 different personality types and acronyms that are often confusing, MBTI language often fades from the casual user's memory very quickly. It’s not uncommon to hear someone say, “I took the Myers-Briggs test a few months ago. I think I was an EN…something? ENFJ? Or was it INFJ?”

On the other hand, DISC offers all of the advantages of MBTI, but with a more user-friendly interface. The simple acronym “DISC” is easy to remember, making a much more lasting impression on users. It’s typical for individuals taking the DISC test to remember their results years after taking the initial assessment.

Also, because the DISC personality test is specific to whatever environment you have in mind when taking the test, results tend not to be as intimate or personal as MBTI. It’s easier for individuals taking the DISC test to share their results, confident that though the test results might reveal their work personality, their private self can remain protected.

Overall, DISC and MBTI are both widely used and respected methods of personality assessment. MBTI tends to work best for individuals interested in a thorough and deep look into their own psyche. Thus, students of psychology and psychiatry often use it as a theoretical exercise in university classes.

DISC produces results that are just as useful as MBTI, but uses a less time-consuming test, makes a more lasting impression, and is a better choice for public settings where results will be shared with others. Additionally, DISC is easier to master and has more direct applications.

This is not meant to imply that no businesses use MBTI or that it can’t be used for applications other than self-assessment. Many have had success with MBTI. It’s a valuable tool with a history as long and respected as that of DISC. However, if you’re looking for a tool to use in the workplace or seeking a personality assessment method that can be learned quickly and be easily applied, DISC is the logical choice.