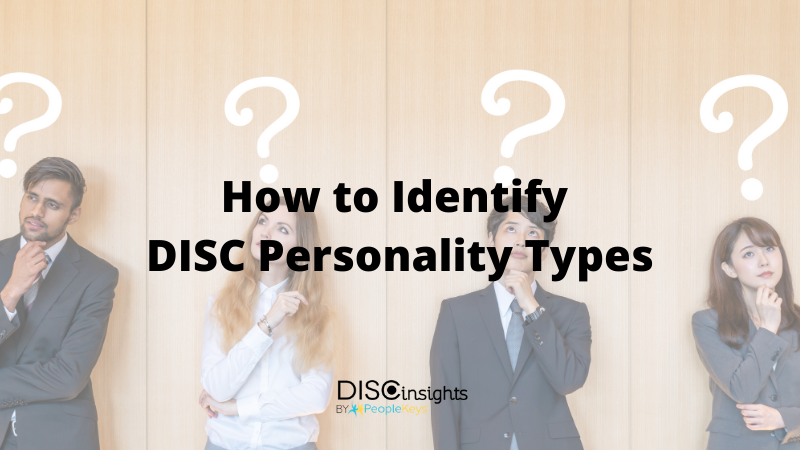 How to Identify DISC Personality Types

What is DISC and how do you identify personality types?

DISC theory is a tool used for behavioral analysis that has its roots in Harvard in the 1920s. Psychologist Wlliam Marston (originator of Wonder Woman and the first polygraph test) had a theory that people’s personalities could be categorized into four different styles. This theory that personality could be placed into quadrants was not new. Hippocrates theorized that human personality was affected by The Four Temperaments. Carl Jung thought that humans could be categorized into four different psychological types, and these four types indicated how they experienced the world.

Marston’s theory addressed how a person’s personality type would affect their behavior. A person’s behavior is an observable phenomena and relies less on that person’s self-disclosure. That makes it easier to apply to social situations.

DISC theory has a myriad of applications. One such application is its use in identifying people’s personality styles to improve communication and relationships. It is difficult to get along with someone that you do not understand, and DISC helps people to understand a person’s fundamental personality style so communication between two people can be adjusted accordingly.

But how do you identify what style a person has? The more you know about DISC, the easier it will be to identify a stranger’s primary personality style. But like any skill, your ability to identify a person’s DISC style will improve with practice.

Try this quick exercise to see if you can identify the personality style of a stranger, like the barista at your local coffee shop.

Are they passive or active?

What is this person doing? Are they passively waiting at the register for you to come to them to order? Are they focusing on slowly and methodically restocking items? Do they seem to be in a hurry, doing a million things at once, or are they focused on the task at hand?

If they are an active personality type, they will be moving quickly, flitting from activity to activity and taking initiative. They will seem to be paying attention to everything that is going on rather than remaining focused on just what they are doing.

If they are passive, they might wait for you to come to them. They will probably look as though they are intent on finishing what they started, like your latte, rather than pouring your latte while talking to you and asking the next person what they want simultaneously.

Are they people- or task-oriented?

Do they seem interested in talking to you or do they seem like they would rather just be accomplishing their tasks? Do they remain focused on the creation of products and checking things off of their to do list (such as restocking products, cleaning the counters, preparing food items)? Do they ask you more than one generic question and seem sincerely interested in your response?

If they are people-oriented, they will be more interested in interacting with customers and co-workers than in doing or making things. Any barista will probably ask you how you are doing. That’s just good customer service. But a people-oriented barista will probably ask you a follow up question. So you just shared that you’re going to work or visiting from out of town. They might ask you where you work or where you’re visiting from and try to make a personal connection to the information you gave them. People-oriented folks are energized by conversation, so they will want to chat.

If they are task-oriented, they probably enjoy the production aspects of their job. The task-oriented barista is the one you will see carefully measuring and re-measuring beans on a scale. They will have a one-track mind when they are pouring steamed milk, getting precisely the correct consistency to get perfect latte rosettes. Or if they are active- and task-oriented, they might just be running around trying to get a million things done at once, avoiding wasting time talking to strangers for more than a moment.

How do you bring this back to DISC?

If you can easily identify which DISC personality type a person has, you can better understand how to approach them and communicate with them.

In our little example, you can narrow down a barista’s personality type quickly. You can do this just by observing them as you wait in line.

Every time you practice your behavioral analysis skills, you can get better at identifying people’s personalities. Now this is really just a superficial observation. The baristas at your local coffee shop, like every other human being, are much more complex than just active or passive, people- or task-oriented. But this gives you an idea of what their dominant traits might be. It also clues you in as to how to approach them and communicate with them, since you can make an informed guess as to what they are interested in and what motivates or deters them.

Try this skill out on your favorite TV show, or better yet, on your co-workers. Knowing a person’s personality style is the first step in improving your communication with them and subsequently improving your relationship with them.