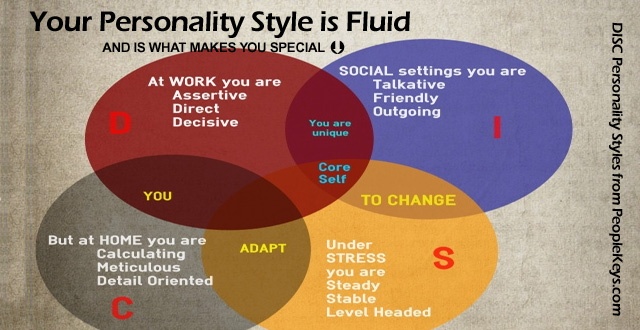 Your DISC Personality Style is Fluid

In his influential 1926 book The Emotions of Normal People, DISC founder William Marston theorized that heredity was a large factor in establishing an individual’s dominant personality style. He believed there are ways of thinking, reacting, and interacting that people are born with and that remain constant over time. This innate part of a person’s personality is referred to as “the core.” Marston’s research indicated that throughout a person’s life, their core personality type typically remains stable. From this, modern personality consultants have come to describe “the core” as modes of normal thinking and behaving that come to individuals naturally and instinctively.

While it is true that a person’s core does not typically change over time, a person’s behavior is not always the same in every situation. There are many ways in which natural behavioral impulses can change and adapt to meet the needs of different situations. My core DISC personality style, for example, is high C. As a high C at work, I don’t like to make decisions without thorough research. I‘m not very spontaneous, and I tend to be organized and a bit of a perfectionist. I’m incapable of sending out an email without reading over at least three times, because the thought of making even the tiniest mistake makes me cringe. At home, though, I’m anything but a perfectionist. In fact, I can be a bit of a mess. At work my office is well-organized and my to-do list is always up to date, but at home I don’t think twice about clutter or leaving things unfinished. At home, I’d much rather spend my time being social and relaxed.  At home, I’m much more an I than a C in the DISC personality system.

Knowing how you behave in different social, personal, and professional settings can help you understand how you relate to others, and guide you to become more successful, motivated and focused. It’s all a matter of understanding the fluidity of personality and the importance of context.

To administer your own free DISC personality tests based on multiple contexts, try the PeopleKeys free reporting website. You'll be allowed to take your test for free and receive a short description of your personality. You can still upgrade to a full report if you like.

To administer your own DISC personality tests with full reports online, contact PeopleKeys to request an online account for ongoing or volume usage.

“A person’s authentic nature is a series of shifting, variegated planes that establish themselves as he relates to different people; it is created by and appears within the framework of his interpersonal relationships.”

Want to learn more about DISC Profiles? Click here: what is DISC?