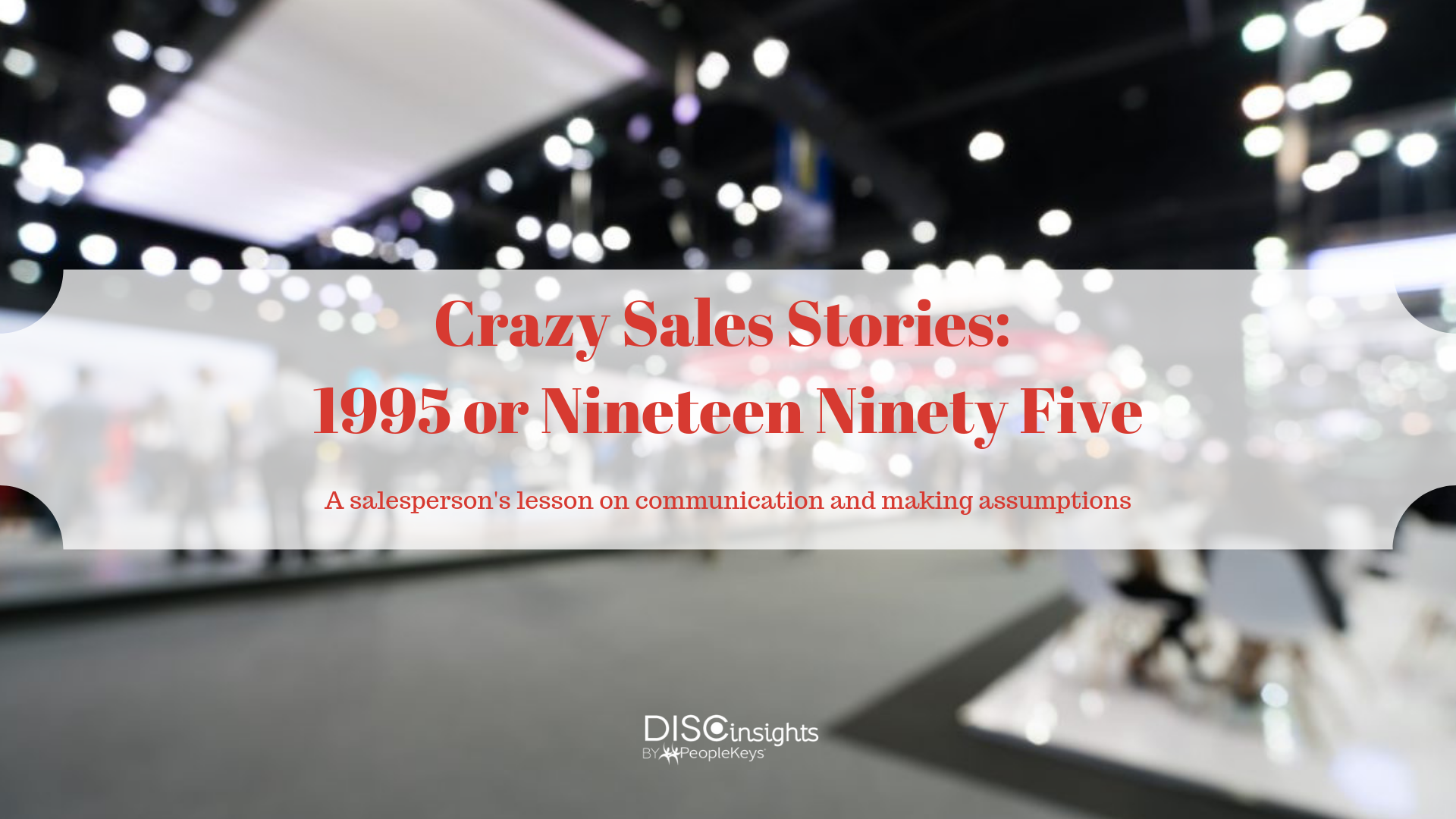 After the first two crazy sales stories: Corporate Selling Without Your Shoes and Luck and Wine: A Sales Lesson for the High I Personality, Brad comes with another hilarious adventure he got into. As one of the developers of the PRO-SOLD method of strategic planning and trainers of thousands in using DISC in sales and business applications, he already has a lot of experiences beyond any belief. Here is a story that didn’t go as planned:

1995 or Nineteen Ninety Five
A salesperson’s lesson on communication and making assumptions
I became the President of a software company in 1994 and had developed several engineering programs for the plastics industry. Kelly, my Programming Manager (a very high C/S style), did such a terrific job at developing code with her team that I took her along to a large manufacturing tradeshow we were exhibiting in Chicago. While at our tradeshow booth, she told me she really had wanted to try sales all her life and asked if she could talk to the next prospect that came into our booth. Knowing she developed a lot of the code personally and could answer technical questions from a prospect, I didn’t see any problem with this.

We had created several versions of a particular software program, ranging in cost from just under $2,000 up to $7,500. The next prospect who walked into our booth was a well-dressed individual, with a slight foreign accent. He proceeded to ask us many questions about the software package. We had a small sales area set aside within the booth, so I led him and Kelly there to sit down and discuss the software package. I excused myself and left the booth to grab a bite to eat. When I came back 30 minutes later, she was still intently talking to him and he was nodding his head in agreement.

Kelly got up from the table, came over to me and in a whisper under her breathe said, “I got this one. He is going to buy right now. Can you believe it?” It was a bit hard to believe since most people did not purchase at the show; we typically gained good leads to follow up on though. A few minutes later, both Kelly and the gentleman came to the main booth area and she said, “I quoted him $1,995 for the package and he wants to buy 2 today, right now!” I was quite impressed.

As I began to take down some information, the fellow got into his wallet and pulled out two $20 bills and handed them to Kelly. Looking quite perplexed, she said, “I am not sure what this is for (a tip for a great presentation, maybe?).” The man replied, “I am making payment for the two packages. You did quote me $19.95 per package, right?”

That was a lesson to never assume anything (even the obvious). I think Kelly would have made a great technical salesperson, but this ended up being her first (almost) and last sale she tried to make.

Would you like to avoid this mistake? Then you should be aware of your DISC Sales Style and you can discover it by taking the DISC Sales Style Report. In under 10 minutes, you can identify the strengths and potential limitations of yourself and/or your sales team, which will help you to adjust your selling style to meet the instinctive styles of their clients. Find out your Sales Style today!