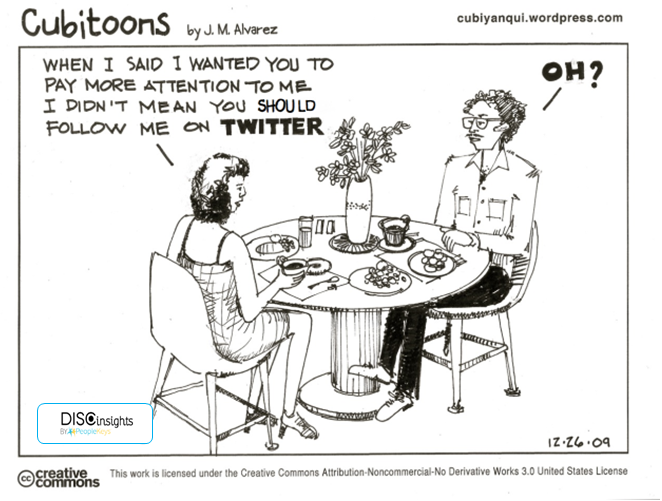 Crossing the Aisle: Dating Someone with an Opposing DISC profile

It’s amazing how a relationship can change with a little bit of empathy. I just finished my Introduction to Behavioral Analysis course and I am not writing as a DISC expert, but I can already tell that seeing people’s behavior as predictable is helping me with my relationships.

I recently got engaged.  My future husband and I have been dating for over three years. We have an extremely enjoyable relationship that is built upon a foundation of friendship and mutual respect. It’s pretty darn awesome! But like many newly engaged ladies, I have had a moment or two when I’ve had to ask a very important question of myself. Am I sure? Him? Can I really put up with the fact that he doesn’t make the bed for the rest of my life?

Marriage is a complicated institution. We enter into an agreement that two people will be partners, for better or for worse, until their death. That means that every little annoying habit that he and I have may become magnified over the decades. If we can’t maintain perspective and see the little things for what they are then we run the risk of tainting what is otherwise a wonderful partnership. To a people- and relationship-oriented person like myself, that could set the tone for how much I enjoy my life. A task-oriented person may find satisfaction through other aspects of their life when their relationship starts to become difficult. But to me, relationships are paramount. Which means I need to be really good at communicating.

Through my newly found understanding of DISC, I have come to see my partner a little differently. I have figured out a better way to communicate with him when our views and motivations differ.

This DISC-based perspective has taken the personal offense out of our little miscommunications. I don’t see it as an affront to the very essence of my being when his priorities differ from mine, rather I see it as a product of his personality profile. Though he and I, like all people, are an amalgamation of the four different styles, certain scenarios seem to magnify our specific traits.

In a relationship, I am more of an I. At work, my S and C sides come out. When he is at home, my fiancé is more of a CD than the I he is when we go out with friends. Though we exhibit different traits in different settings, our baselines tend to remain about the same. Once I understood that, our responses to different stimuli became pretty predictable. They also became a lot less personal.

My soon-to-be husband is predominantly a C style. I am mostly an I. This is most clearly visible in the morning. When he wakes up in the morning, he gets up only a fraction of a second after his alarm goes off. He wakes up with a list of tasks in mind. He intends to accomplish all of these. He showers, gets dressed, makes coffee, and walks out the door without any dawdling. He is in go-mode from the second his feet hit the floor.

Me? I hear the alarm, and I hit snooze. I do this twice before sitting up. I look at my phone. I check my email. I read The New York Times. I scroll through Facebook and Snapchat, glance at Instagram, and peruse Pinterest. I make myself feel guilty for taking so long before I finally leave the bed. This of course happens fifteen minutes later than intended. After this I leisurely engage in a number of activities of varying importance. I do these in no particular order before I finally -- finally! -- force myself out of the door. I leave the house at the very last minute that it is possible to leave and still be on time.

He and I are very different animals in the morning, to say the least. But that is all well and good when we have different schedules. This changes when the weekend rolls around. On the weekends, we get to sleep in.

When he and I sleep in on the weekend, he still wants to get out of bed the second that he wakes up. He is in a hurry to go and run errands. To me, this is the antithesis of the purpose of weekends. Weekends are for cuddling and being lazy together, obviously. It used to make me upset. Why is he such an accomplishment-driven maniac? Why doesn’t he want to cuddle with me? Doesn’t he like me anymore? When I would imply that I felt this way, he would also get upset. He had things he would like to get done, and I was forcing him to stay in bed. Didn’t I understand that he had to get these errands finished before he could relax?

This is so very typical of both of our personality types. As an I, my biggest fear is rejection. When my fiancé doesn’t want to snuggle with me on the weekends, I feel a little bit rejected. It pokes at my fear that he could fall out of love with me. To me, love is shown through verbal and physical affection. Denying me this affection is, in some ways, tantamount to saying you don’t love me. I know that this is silly, and my rational mind allows me to refrain from blowing it out of proportion. But it stings a little, nonetheless.

We I’s need (what may seem like) nearly constant affirmation and affection. We need to be reassured that we are liked. Which, come to think of it, is pretty silly because as a whole, we I’s are a pretty likable bunch.

My guy is more of a C. He is task-oriented rather than people-oriented. He wakes up with a list of things he would like to accomplish in his head. He thinks about the time constraints he has and makes a plan of action. He would like to engage in that course of action before he wastes too much time.  His D side dictates his ability to be goal-oriented. If he were purely a C, there wouldn’t be enough time in a weekend to get a project finished. To a pure C, projects are never finished because they can always be improved upon, and so the pure C moves ahead at a very slow pace. He isn’t quite like that; he is very concerned with deadlines, so he works at a faster pace because he is afraid of running out of time, the sufficient time to get things finished. His greatest fear is criticism. This mostly relates to criticism of his work, and he is his own worst critic. When he has to wait until the last minute to attempt to accomplish something, he doesn’t give himself the time that he needs to be thorough and precise. This drives him crazy.

Let’s go back and apply a DISC lens to the “sleeping in on the weekends” example. Say, during a particular weekend, he promises a friend that he will build them a coffee table. I try to keep him in bed instead of letting him go to the hardware store. I am unintentionally poking at his greatest fear. If he doesn’t have time to build this table well, it will not live up to the high standards that he has for his work. He doesn’t want to endure that type of self-criticism. He would much rather just get up and moving, so he doesn’t have to worry about this. And there I am saying, “But first, hold me!”

So when I try to keep him in bed, I am trying to ask him to love me more. When he wants to get up to leave, he is asking me to let him be efficient so that he will not be ashamed of himself.

To him, getting out of bed right away has nothing to do with how he feels about me. (This realization has changed the tenor of our mornings together. It’s huge, people!) His "up and at 'em" attitude in the morning is about accomplishing his tasks for the day. Once again, this has nothing to do with me.  He has already scheduled time for me -- after errands. I am a priority, but time with me is allotted to a specific portion of the day. If I can remember to acknowledge this, I can minimize my feelings of rejection. I can help him get his needs met without getting hurt.

This is how DISC can be so helpful. Once I understood our personalities, I could depersonalize our behaviors. I became capable of approaching our potential differences with a keen, observational distance. I was empowered to re-frame my understanding of a situation. This allowed me to have more empathy and to improve our relationship and communication. A change in perspective will serve us well through the course of our marriage. We can have fewer misunderstandings if we maintain behavioral awareness.

I may still feel a little rejected every time he rushes out the door, but it helps to be aware of this. Because I am afraid of rejection, I will read everything as a potential rejection. Unless I am being behaviorally aware.

He, as a C, desires to accomplish goals. He can do this with minimal frustration if he, too, can maintain behavioral awareness. He knows he will feel frustrated when something impedes his ability to do things, such as being stuck in a traffic jam or being forced to cuddle. He is usually going to be in a hurry, but he can curtail the negative effects of this task-driven mentality by scheduling a little bit of time with his gal in the morning. He can reduce the anxiety he will feel about this counter-productivity by letting me know I have until ten o’clock, and then he has to get going. That way I’ll know it isn’t because he’s fallen out of love with me when he has to rush off to Home Depot.

It’s difficult to always see the forest for the trees, but DISC has been a useful lens through which we can observe our relationship and make improvements to it. Who knows? These two crazy kids might even make it. He should still start making the bed, though.

What's your DISC style? If you don't know, take our online DISC test in 10 minutes and find out! Also check out our blog about Marriage and Divorce.