DISC at the Movies: Can you Spot DISC in your Favorite Films?

The next time you go to the movies, here’s a fun experiment to try:

Take a look at the main characters on the screen. Can you match them up with their DISC personality type?

There are so many great examples of DISC personality types on film. For example:

S = Michael J Fox in Back to the Future

Next, take a quick head count of the main characters on screen. Are there four? If so, then chances are you’re looking at a classic “4-Temperment Ensemble.” Any time a fictional ensemble is made up of four characters, it’s likely that the personalities reflect Dominance, Influence, Steadiness, and Compliance. This isn’t a coincidence. This is something that writers do intentionally, with the hope of creating a group of complementary characters, each with their own unique perspective.

Writers have been creating stories based on the interaction between the four major personality types since ancient Greece. Stories that use all four of the DISC personality types are incredibly common, yet it isn’t until you become trained in DISC that they start to stand out and become clear. For two modern examples, consider: 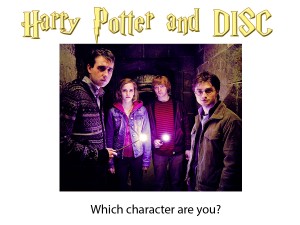 The main characters in the Harry Potter stories are all very different from one another: Harry is the leader, Ron is charming and outspoken, Neville is loyal and constant, and Hermione is organized and well-read. Yet, the characters all learn from and complement each other. In the world of the Harry Potter movies, the team created by Harry, Ron, Neville, and Hermione function as a balanced team. Together, they come up with solutions that none of them would be able to plan or enact on their own.

The four male leads in The Hangover also each clearly represent the four DISC personality types. Phil takes charge and makes decisions for the group, Alan is talkative (though odd) and is happiest when he’s around other people, Alan is the family man, and Doug is controlled and organized. Part of the reason the movie is so funny is that all four of these very different men are so inflexible in their personality styles that the audience can’t help but laugh when they’re forced out of their comfort zones. (For example, cautious and controlled Stu waking up with a Mike Tyson-style face tattoo.)

Once you start recognizing how common it is to have four-characters in a film divided according to DISC behavioral styles, you’ll be amazed. Why not give it a try this weekend?