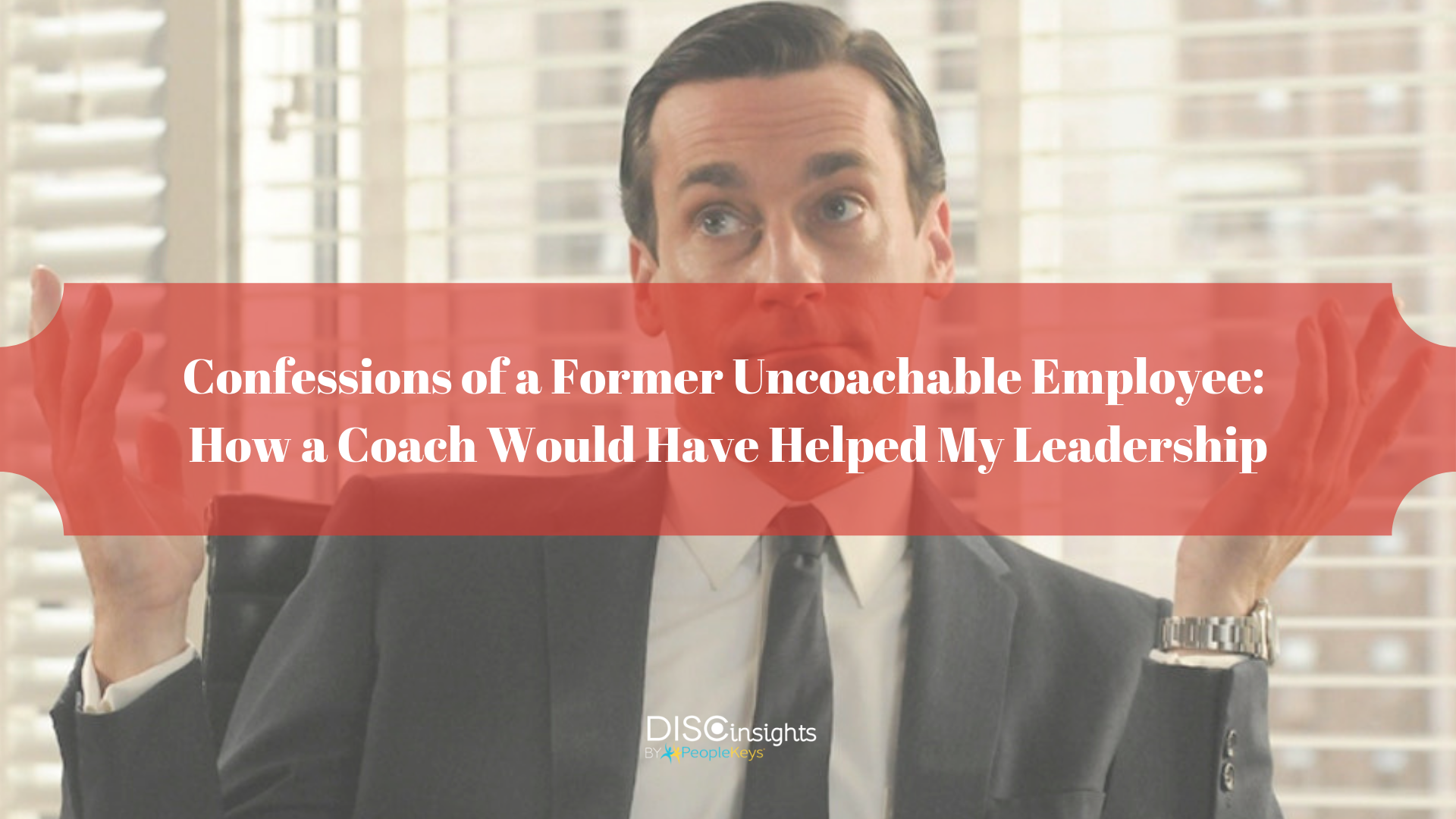 Coaching the Un-coachable: How a Coach Would Have Helped My Leadership

Growing up, I loved sports, especially football. My high school football career culminated with an award for my coachability and an offer to play in college. Fast-forward 20 years: I was one of the most uncoachable people on the planet. I didn’t know this at the time. Others certainly did. Only after being laid off and having time to explore my personal growth did I see it. How did this happen?

Reflecting upon that time and using DISC Theory and the most detailed behavioral assessment – the PeopleKeys 4D Report which expands DISC further to Thinking Styles, Values, and Behavioral Attitudes as lenses – three things came together that influenced my leadership development or lack of.

Over those 20 years, I naturally rose in leadership positions. I gained confidence and counted less on others for feedback. The end of this period placed me in one of the most bureaucratic and political organizations for which I had ever worked. My main DISC style at the time was Dominant (D), and my top personal value was personal freedom (which I lately realized from my recent 4D Report). In that environment, I felt handcuffed at every turn. So, what did I do? I doubled-down on my Dominant style of course! I was uncoachable because I didn’t feel my values were being honored in that environment.

As I rose through the ranks, I felt more urgency to get things done. Additionally, my perception of “I must be the expert since I’m leading this team,” tricked me to believe that I shouldn’t have to ask for outside advice. Cue the dark side of the Dominant style and I was the Darth Vader of uncoachability. Using my recent 4D assessment as a lens, I realized that my natural role in teams is that of a Theorist. Characteristics of Theorists include creative problem solving and idea generation. Combined with my DISC style, the result was that when I shared my quickly developed solutions, I was 5 steps ahead of others. This left the team confused and me impatient. Now I know that I need to explain my thinking in details with a step-by-step approach and check with the team for blind spots.

A lack of full self-awareness was at the root of being “Mike, The Uncoachable.” Even though I had taken the DISC assessment in my second year of that job, I saw it as another thing on the human resources’ checklist. The only follow-up with me was one session to go over the results. While I was told my primary DISC style was Dominant, without any additional insights, my internal response was “Yeah, but that’s how I got here.” Arrogant, I know…

So how would someone have helped me? Hindsight being 20/20, I wish I had sought coaching sooner rather than later. Here are my thoughts on how to approach an uncoachable employee:

A coach should make sure to go beyond the basic assessment and apply a 4D Report so they should be able to match up not only with the communication preferences of the personality style they are working with. In my case, if someone would have also asked me by whom I would like to be coached, my value of personal freedom would have been honored. Then I may have listened and internalized the feedback.

Include values in coaching

Knowing both the values of the organization and my own personal values would have made it easier for someone to make the comparison and say, “Can’t you see why you become frustrated?” Then have a conversation and an action plan on how to better operate within the current environment to achieve alignment with my values.

While not fully self-aware, I was my own worst critic. Pointing out my uncoachability would not have been the most constructive way to approach me. In fact, my DISC report at the time seemed to vilify the Dominant style. Without additional positive coaching from the right coach, I simply carried on with the same leadership approach. A statement like “Mike, you have a lot to offer this organization. How can I/we help you get more of what you need to grow as an employee?” would have led to an insightful conversation that could build trust and personal ownership of performance.

PeopleKeys DISC and 4D assessments are objective tools that MUST be a part of any discussion with your employees. I now regularly talk with a life coach using my DISC and 4D results as touch points when working through something. My personal growth success has come by using my uncoachable time to gain insights on better leadership choices in the future. Better late than never!

Michael Dattilio enjoys focusing on the interactions of parts in any system, be it a team, a process, or an organization to help create simple solutions to sometimes complex challenges. Personality Style: D