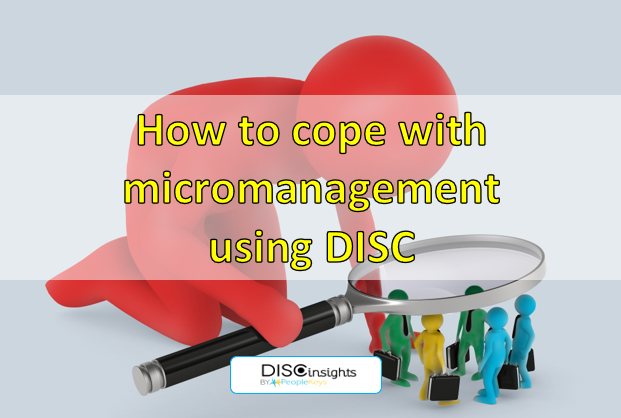 How to Cope with Micromanagement Using DISC

Coaches use DISC to understand the catalysts for micromanagement. Understanding behavior is the first step to creating effective coping strategies.

If you’ve been in the workforce for any length of time, you may have been micromanaged or have practiced micromanagement at one time or another. If you don’t realize your own potential for micromanaging, that’s okay; few do because it’s a blind spot for many (Behavioral blind spots are a part of every DISC style. Learn more here). Micromanagement is actually more prevalent than you may think, according to a study showing 79% of workers said they had been micromanaged by previous managers.

If you are a manager, you might justify any gratuitous checking, changing, or fixing by declaring “the company’s reputation, our department’s goals, or my job is on the line.” But before you discount your own potential for micromanaging, keep in mind the practice is rather widespread, as well as ineffective and inherently counterproductive. It’s not surprising then that micromanaging is part of our “Dealing with Difficult Behavior” series.

Workforces of the past may have benefited from tighter controls, but younger millennial-minded generations today won’t respond well to the authoritarianism effective in the 1950s. A study by The Australian Leadership Foundation says 42% of Generation Y’s surveyed reported that poor management and leadership was a key reason for leaving their previous role. Younger people want to be pointed in the right direction, not “preached at” and expect greater feedback, less silos, and more collaboration with their managers. It may be obvious, still a study finds people who believe they are being watched perform at a lower level.

To find coping strategies for both the manager and the people they manage, coaches use DISC to understand the impetus for micromanagement: a first step in increasing morale and productivity.

We may vilify micromanagers as people who set out to purposefully disrupt business processes. We may believe they think they are better than others, control freaks, or wet-blankets, but these labels are too simplistic and just not true. No one sets out to consciously micromanage. Rather, it’s a natural response rooted in behavioral fears, and no one is exempt from this latent capacity. Being aware of what’s behind it is the first step to combating it.

Using DISC graphs, you can understand the catalysts of micromanagement. Let’s first look at what each graph represents:

A person’s DISC graphs will reveal strengths but also the intensity of hidden fears. When we talk about fears, we don’t mean spooky fears but rather insecurities, the shadow side of strengths. What makes us great also exposes our greatest vulnerability. For example, a “D” style may excel when respected or when in control, but when their ideal environment is threatened, what happens? They become insecure, and compensation can take the form of micromanaging tendencies.

Graph 2 (under stress) - If energy increases in a behavioral dimension on Graph 2, you can see ways a manager might compensate for insecurities through micromanaging. (See increase in “D” and “C” energies in Graph 2 above.)

How do you know if you are micromanaging?

According to the book My Way or the Highway: The Micromanagement Survival Guide by Harry Chambers, you might be micromanaging if:

Micromanagement is all about interference and disruption, generally out of some perceived fear or insecurity. It becomes troublesome when a manager’s influence and involvement begin to subtract value from people and processes, which eventually affects morale and productivity.

Once you understand the basis for micromanaging, you can hopefully avoid micromanaging behaviors or coach others to recognize and avoid acting upon their fears and insecurities. Here are a few strategies which have been proven successful with millennial-minded workforce:

The above talent management strategies are gaining popularity and success in today’s prosperous employee-centric companies. These have been found to increase morale and retention, as well as productivity.

To utilize DISC to coach managers to improved understanding and increased morale, read more about how self-aware leaders are more effective leaders. To maximize your DISC graph-reading skills, start with finding your Personality Style.